In the Armada, Vekar, Argus, Levira, Damaras and two Royal Guards are looking at a Megazord that is almost finished. Vekar is excited about the Megazord, because it looks good and that his face is also on it. Levira, Damaras and the Guards leave shortly afterwards, and Vekar has a plan to end this long invasion and asks Argus to lead the plan, as he's the only one that he trusts. On the skyship, the Rangers are enjoying their time when the ship is blasted at by several XBorgs and Bruisers. Noah fights Argus alone, while the other Rangers easily defeat the others. As the last set of XBorgs are defeated, the Rangers try to assist Noah until the Royal Guards show up, who almost overpower the Rangers, but Orion tells the others that he'll hold them off. In the warehouse, Argus easily overpowers Noah, and when the other Rangers arrive, Vekar appears and congratulates Argus for his loyalty. He then shows off his Megazord, which shocks all the Rangers. The Rangers get their Megazords and prepare to fight Vekar's Megazord, but it is just too fast for them. In the main ship, Levira and Damaras watch Vekar easily overpower the Rangers, although Damaras has doubts in his mind. A flashback occurs where Emperor Mavro tells him to protect Vekar at all costs due to his blunders, but he is still his firstborn and next to the heir, before Vrak. Vekar's Megazord unleashes a powerful blast which causes the Rangers' Megazord to explode, but Troy ejects all of the other Rangers before it does. Vekar is jubilant and now needs to hunt five more Rangers, as he believes that he destroyed one of them. In the ship, Damaras congratulates Vekar for his success and that a feast has been prepared to celebrate their victory. However, Vekar won't celebrate until he destroys all the Rangers and conquers Earth, so he sends Argus and a large group of his soldiers to find the other Rangers. Somewhere on the Earth, Noah tries to regroup with the others but Argus is blocking his way. In another area, a group of XBorgs scan the woods for other Rangers. After they pass through, Orion leaps down from the branch and something taps him in the back. He turns around and finds Emma and the others (minus Noah). The two fight, and even though Noah is losing, he refuses to give up and blocks a large amount of Argus' attacks. When Argus tries to finish him off, Noah reflects his attack back at him, and then throws his saber into his chest, killing him. On the ship, Vekar is shocked and angry that he killed Argus, and despite Damaras' protests, goes to his Megazord. Noah finally catches up with the others shortly afterwards. The Rangers are then attacked by a large group of the Armada's forces, but the initial group is destroyed by the Skyship, and the Rangers are happy to see that Troy didn't die from the explosion. The two Royal Guards then appear, but with all of the Rangers working together, manage to defeat them. Vekar then arrives with his Megazord and the Rangers get in their Megazords, and Gosei tells them their perseverance has allowed them to unlock the Ultimate Megazord, which they use. The Ultimate Megazord easily destroys Vekar's Megazord, and on the Armada ship, Levira and Damaras are shocked that Vekar has been killed, and Damaras says its time to avenge their leader. On the Skyship, the Rangers celebrate their huge victory over the Armada. Meanwhile, somewhere on Earth, Damaras carries Vekar's body from his Megazord and is regretful that he didn't protect him enough, and promises to take his revenge on the Rangers. 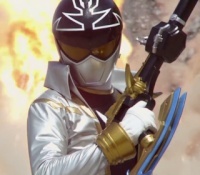 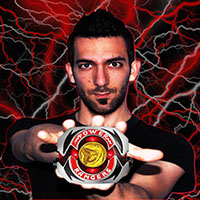 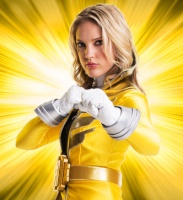