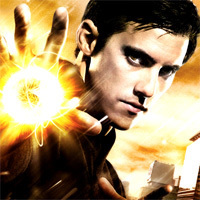 When Black and Blue investigated some strange happenings at a shrine, Blue was injured. Later, a mysterious flux attracted both the Gao and the Orgs to the same shrine. Shrine Bell Org then captured Blue inside of a giant bell.
Shuten, Yabaiba and Tsuetsue fought Gao Red, Gao White and Gao Yellow while Gao Black tackled Shrine Bell Org. Black broke the bell open before Blue ran out of air. Gao Blue and Gao Black teamed up to subdue the enemy. The five heroes reconvened to defeat Shrine Bell Org with the Hundred Beast Sword. Tsuetsue quickly revived the monster.
Once Gao King trapped Shrine Bell Org inside of its own bell, it unleashed Animal Heart. Shuten located the source of the flux - a mystical rock and scroll. However, the Org couldn’t physically hold the sacred items and they ended up in the Gaorangers’ possession.